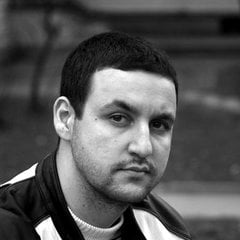 Somewhere between socialism and something else, in the very beginning of the upcoming long and cold winter of 1985, Miroslav was born, with a marvelous for the time almost 5 kilograms weight.

Until the age of 9, it was his teachers’ conviction that he was a natural born art prodigy. Years passed, though, and he proved them all wrong by not evolving at all artistically (one of his biggest regrets in retrospect). Rumor has it, it might’ve been due to the onset of computer games and/or the Internet and the unprecedented ease of access to pictures of girls in various stages of undress…
Miro put his drawing on hiatus until the age of 17, when all that time he’d sunk into playing computer games, finally paid off in an unexpected way. One day, he booted up Warcraft 3, and there, he found his inspiration in Blizzard’s art team incredible artwork. There was no turning back. Going back to the pencil and ink, Miro spent countless nights at improving and refining his skills, before finally deciding to make the jump to digital art.
All the hard work was not for naught: in 2006, he was hired as a concept and texture artist at the game developer Masthead Studios, where he spent the next 6 years giving freedom to his fantasy, and bringing fantastic creatures and landscapes to life. In 2012 Miro left the company to pursue his own business and to branch out in more diverse creative directions.